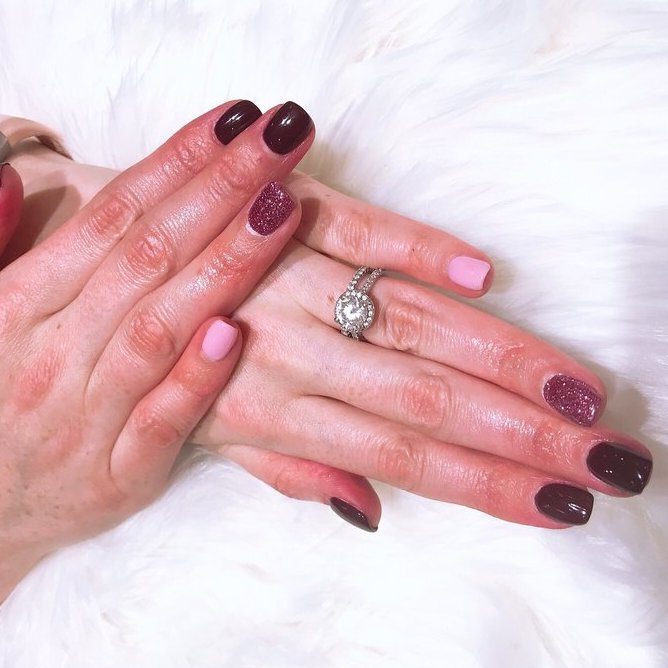 I cannot say enough positive things about this place. Ive been coming here for years and absolutely love my nails each and every time. 10/10 would recommend every single time.

Do Not Recommend! I just had a terrible experience while sitting for a pedicure. The lady pinched me twice while cleaning my nails with the tool. Then I asked her if she could clean my big toe a little bit more and she said “stop moving your feet”. I was not moving my foot. Right away her mood changed and I asked her for a towel to wipe off my feet to leave. She began using the towel with my clipped toenails. Are you serious?! I asked for a clean towel and she threw it on my feet. I dried off and asked for the manager. No manager on site. I told her she was unprofessional and should practice on providing better customer service. Mind you this is the second try I’ve given this place. I had stopped going once before because they were mimicking my daughter (baby talk). Again, very rude. Lastly, speak English when you have clients in your establishment. Speaking your native tongue is rude when others can’t understand and you’re the only one in the store.

They did a really bad job and my dip manicure dried in a way where the top was matte and sticky and not smooth like they were supposed to be and they refused to fix it when i asked. also a 50$ manicure somehow didn’t include any cleanup of my cuticles etc. very dissapointed. will not be coming back

Save your money and time and go somewhere else. I went in yesterday for the first time. The google reviews were decent and the pictures showed pretty nice designs. I made an appointment and later called to push it back by 20 minutes. They seemed really annoyed and had an attitude. I asked for red french too and a simple heart design. I got whatever that was in the first picture. I was charged $50. $50 dollars for a messy design. I have gotten prettier, more intricate nails done with acrylics for $55 before. I went back the next day to get it fixed because I didn’t realize how bad it looked inside the salon. I went in and explained and they fixed it. I appreciate that they refunded me the design fee in a gift certificate, but their attitude was awful. I don’t expect to be kissed up to or anything as I’ve worked in customer service before but it was just really frustrating that I paid so much for nails I didn’t like as well as an attitude that made me want to leave. I was made to feel uncomfortable and really unwelcome. I noticed that this is a trend among others who have gone, and it holds true. I will not be going back in the future

Im so happy I found this place! I just moved to the neighborhood and I was having a hard time finding a place that does a great dip manicure. Tony did an amazing job! Ill be back fore sure!

Clean, friendly, able to take 2 of us immediately.

Absolutely horrible experience. My friend took me here and was raving about the place. I asked for dip with nail extensions but when Tina began to do my nails she forgot the nail tips. Then she made a huge deal about it and started talking with everyone else in the salon. She then put tips on and didnt ask me what shape I wanted. So I had to tell her I wanted COFFIN, which she then proceeded to take the nail tips off and put new ones on. I Sat there for TWO HOURS for my nails to turn out some chunky almond shape and not the coffin shape I wanted.

I go to Lily’s nails often. They do a great job. It’s a clean facility. I have done the dip manicure once, it wasn’t my favorite due to how thick it looks . But I love their gels. They take their time and make sure it looks perfect.

Thank you so much, my first time In Chicago was being delayed on a flight and ended up in the area. Suprisgnly they were open, I walked in and did a pedicure. Very relaxing atmosphere, I wanted to go to sleep. 👍

Customer service is Amazing!!! They are so kind and go over and beyond to make you happy.

I went with one of my friends to get our nails done for homecoming and we all had pictures of the color we wanted and the design. Mine was a sparkle accent nail, but dropping not the whole nail. My friend also did to. While I was getting my acrylics, my friend was getting a pedicure. I was suppose to also after but i hates my nails, I just didn’t want to stay any longer. The color is awful, the sparkle isn’t anything I wanted and it was 50$!! (dip acrylic). I wish i can get a refund or something different.

Waited an hour and they didn’t even apologize but took others before me. They are so unorganized and don’t even speak in English so people just pretend to have appts and walk in. This place is so unprofessional and not recommended! Nail Republic does acrylic nails and has better service in Park Ridge. Don’t waste your time here!

I always head here for my no chip manicures! The staff is friendly and always patient when waiting on me to pick out a nail color. The salon is clean and the prices are also great! Highly recommend heading here for your next nail appointment!

This place has the best no chip manicures around! They stay on for way longer than my old nail salon and the atmosphere is way better! The employees are always happy to help and really know what theyre doing. One appointment here and I guarantee that this will be your new go to salon!

Hot stone massage with pedicure topped it off

Have been coming here since they opened a few years back! Great quality services! No chip mani lasts well beyond 3 weeks! Pedicures are relaxing and also done to perfection! Can’t say enough good things about this place!

Ive been here twice and they did a great job on my no chip mani. Im confident that Ill return. Theres just something lacking in the atmosphere here that prevents me from giving it 5 stars. They do charge less to cash customers, which I take advantage of.

Worst nail salon. I get my nails done all the time and it’s been the worst customer service experience. The nail tech did not even say hi or acknowledge me as she started. When I asked to make nails shorter, she had an attitude and cut basically the whole length of my nail off. Will not be coming back

This is my go-to place when it comes to getting my nails done. This is one of the best pedicures I have ever received. I plan to come here more often and it is right here in Park Ridge!

I love coming to this place. The people are so nice and they have so many colors to choose from.

Me and my friend decided to get our nails done and two of her nails broke and she paid 55 dollars for them WASTE OF MONEY!!

This is the only place I have been coming to since they opened! Not only do they do a great nail job but they are friendly and have great customer service. This nail salon is a great place to go and pamper yourself!

Wish I could give 0. They are incredibly rude, barely said a word to me. Acted like we were bothering them by giving them business. I called to ask if they do child mani/pedis, they said yes. We got there and the had my daughter sit in a chair and messily painted her nails. Didnt even sit in a pedicure chair. I could have done that myself. Then they charged me $10 to do it. They couldve at least tried to make her feel special. Will never bother them with business again.

I loved getting my nails done here. The staff was super friendly and they did a fantastic job!

They gauge the price on everything and they were speaking Vietnamese so loudly during my last appointment I got a headache. They didnt address me once or care that I was there. I will never go to this salon again just based on the fact that they advertise cool nail designs on their website but want to charge you $10 extra for one. Plus theyre kinda rude.

Was extremely pleased with my entire service, relaxing chair massage during pedi. Attentiveness and thorough with cuticles my nails on point!Thank you John and Lilys Nails I will be back!

Staff was very very rude to me. Not in love with my nails and I wanted to ask for a change of color but I was so uncomfortable with how the staff treated me I couldn’t be in there another second.

Very clean place. All nail tools are clean. People are so nice here. Prices are great.

Im posting this review on behalf of my wife. We came here a few times, driving almost 30 minutes away because she liked one person that was very careful.Last time we went there however, an older lady did her nails, and my wife said that she wasnt as careful but given that she had already started, she was going to let her finish.A few days later, her nails started chipping and she noticed that the color was uneven, given that she paid for the no-chip one. We went back to get it fixed and the manager wasnt helpful and they told her that she needed to pay for a new manicure to get it fixed.Such a shame because there are a few good employees, but given the establishments poor response to a job that wasnt well done. It seems that the salon is not willing to respond as a business if things go wrong, which is just bad service in general.

Awesome awesomeGreat work, my nails are perfect. They are very very excellent

Great place to get a mani and pedi. The staff is very nice and they do a great job. Its a great place to relax and pamper yourself

I recently brought my mother here as a birthday gift. She was very pleased with her nails and the staff was very friendly to both of us. 5/5

Love it there! All staff is real nice!

Maybe I had no luck with the nail master? I scheduled an appointment, but she was so much in a hurry.....I didn’t like my experience at that place.

They messed up my manicure twice in a row! not worth the money!!!!

Emily is the best